WHAT IS THE BLACK LIVES MATTER MOVEMENT? Importance of this movement

Racial discrimination is quite prevalent in the united states and it is a part of the everyday life of Black Americans. It is reflected by physical violence and insults at personal, state as well as national level. This discrimination can be seen from legislation, racial profiling, street names, educational discrimination, access to housing and jobs, and a lot more. Current events from across the world are proving the importance of protests to put an end to this racial discrimination.

With the “Black Lives Matter” movement, the team aims to create an example against racism. The movement started in the United States to create awareness of violence and racism done against people of color and African Americans.

Some simple facts about the Black Lives Matter movement: 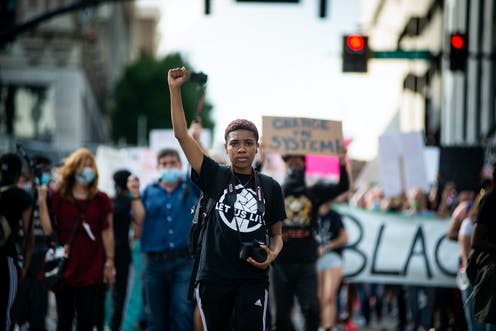 This is a social movement that started off in the year 2013 against racial violence which is done by police officials in the US. This movement grabbed a lot of attention after the death of Trayvon Martin, an African American teenager, and George Zimmerman’s acquittal. People were highly disturbed and shocked after these incidents and the blatant injustice was crystal clear and so there were protests, riots, and demonstrations all across the country.

This movement is often associated with the term “I can’t breathe” which became the main motto of the movement after George Floyd was killed by a recorded police operation. The death of this African American man shook the entire country wherein in his last few minutes George was repeatedly saying I can’t breathe. The incident cleared that there was unnecessary violence against a black individual in the country and brought forth the face of racial discrimination in the country.

We started out this movement with a hashtag and now it has reached every corner of the country. If you too want to become a part of this movement you can get a black lives matter poster, shirts, slogans, songs, etc. to show your opposition. Together we can fight against the oppression done of African Americans and bring justice and peace to them.

Finish in good faith – Is this the truth about you?